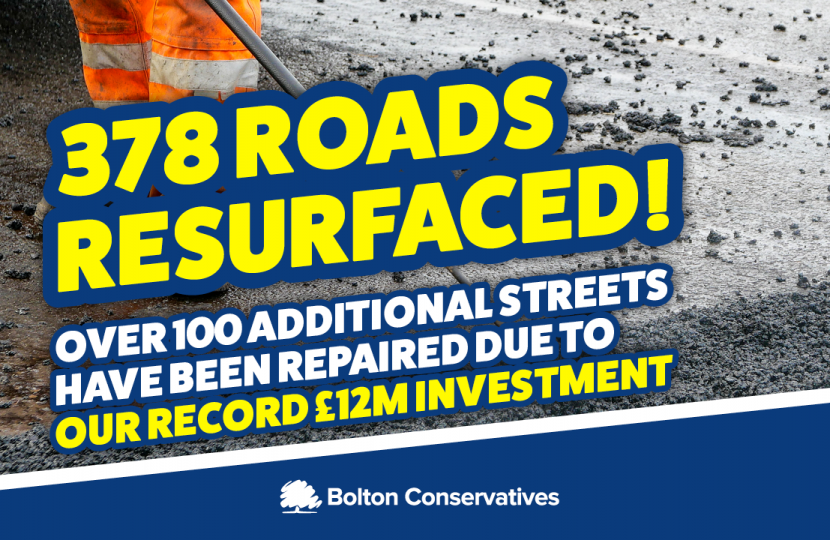 The Conservative pledge to provide £12m to repair roads and pavements across the borough has exceeded its targets by resurfacing more than 100 additional streets. The original plans were to complete 270 roads and pavements. But the council has gone above and beyond, working with contractor partners to deliver a staggering 378 repair projects, with more work planned in the new year. This work has been alongside several additional smaller repair and patching jobs.

The £12m scheme was announced in 2019 as a key Conservative council commitment to improve the state of residential roads across the borough. Under our direction of openness and transparency, each ward was allocated £600k and local councillors were tasked with drawing up a list of priorities. By ending favouritism under Labour, we've been able to see improvements right across all the towns within the borough.

Five more repair jobs are already in progress and ten schemes are planned for January and February. Three more will have start dates confirmed shortly while two more are on hold due to ongoing developments.

“We committed to using £12m to address an issue we know Bolton residents care about. Not only have we delivered on our promise to fix potholes and improve the roads outside our residents’ homes, but we have gone above and beyond by completing 100 extra repair projects.

This is a direct result of the hard work of the council’s highways team and our strong partnership with local contractors. As a council, we will continue to invest in our communities and prioritise the issues that Bolton cares about most.”

Bolton Council takes more than £200,000 of illegal goods off the streets

We're cracking down on illegal trading across Bolton, with more than £200,000 of illicit goods taken off the streets.