Fly-tipping crackdown results in fines of more than £10,000 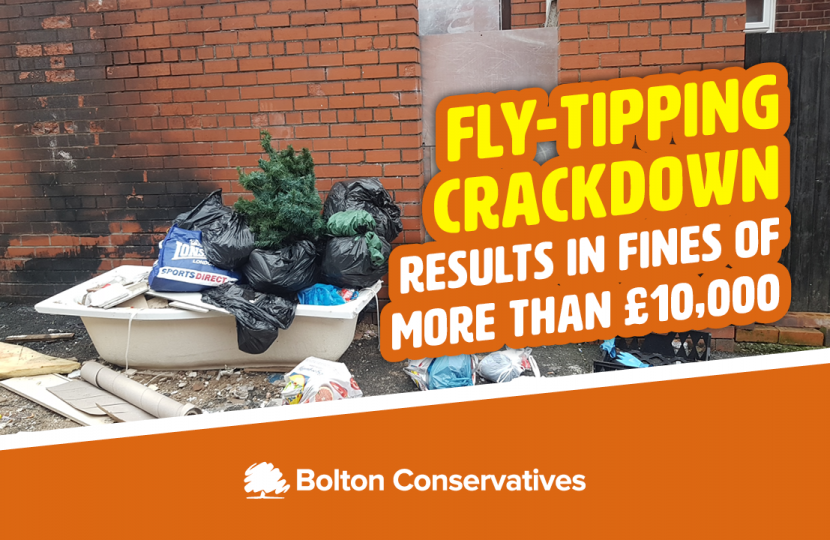 As part of the Conservative administration's policy of strong enforcement for fly-tipping, Bolton Council has taken five residents to court resulting in more than £10,000 in fines.

Each offender was handed a fine of £2,000 for their irresponsible actions as well as order to pay a combined £4,000 in costs. The offences all took place between August and November 2021 and were brought to court last week.

The waste was mostly dumped in the back streets of communities and ranged from bin bags of rubbish to furniture and even a bath.

The council’s dedicated enforcement teams are committed to challenging, investigating and taking the necessary legal action against anyone found to have dumped waste unlawfully.

Clearing up waste that has been illegally dumped not only costs the council and therefore the taxpayer, but it is an eyesore in the local community and damages the environment.

Residents and businesses are reminded of their duty of care to dispose of their own waste in a responsible and lawful manner.

Tackling environmental crime like fly tipping is a key priority for this council and these prosecutions and substantial fines send a clear message that if you dump your waste, you can expect to face the consequences.

I encourage residents to report incidents of fly-tipping to the council on their website.