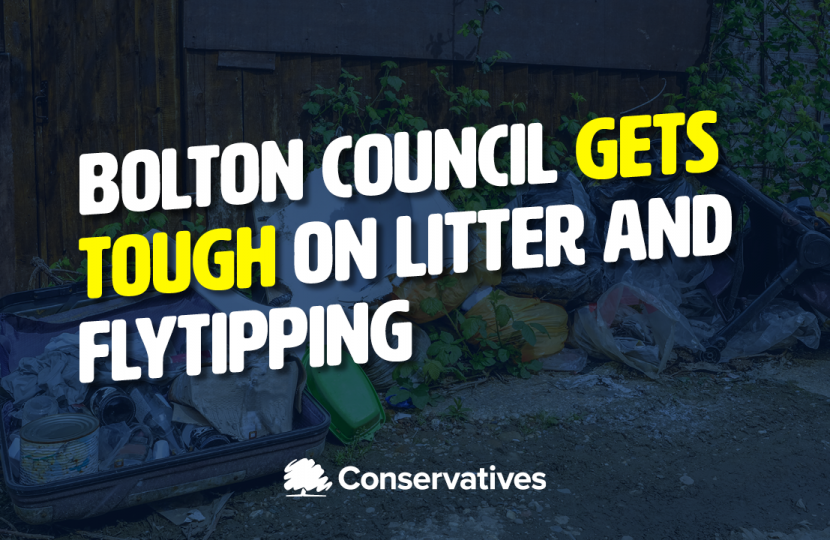 As part of our ongoing commitment to a cleaner and greener borough, the Conservative administration of Bolton Council is cracking down on fly-tipping and on those people who drop litter with a new fines regime set to come into force. Plans are in place to nearly double fines for dropping litter from £80 to £150. In addition, householders will have to take more ownerships as they could be held responsible if they pay illegal waste carriers to take away waste which is then fly-tipped.

The crackdown also includes plans to get tough on those dumping rubbish at the roadside from cars. Under existing rules, council enforcement teams have to prove who has dropped the litter from the car. Now the council will issue a £150 fine to the registered owner of the vehicle from which the litter was thrown.

The new get tough approach is part of a borough-wide effort to reduce the problems caused by littering and fly-tipping. The council will make use of existing powers to beef up fines against those found to be littering the borough.

The vast majority of Bolton residents take pride in where they live and dispose of their litter responsibly. However, it only takes a small minority to spoil our borough for everyone else.

Littering and fly-tipping has an impact on us all – on our health and wellbeing and how we feel about where we live.

It just saddens me that some people just can’t make the effort to take their litter home with them or put it in a bin. It doesn’t require a big effort and just think how much nicer our streets would be if everyone did the right thing.

For those that do continue to drop litter or fly-tip we hope this new set of fines will act as a significant deterrent.

It’s really important that householders don’t use the services of these illegal operators which are advertising their services on social media.

If someone is offering to take waste away for cash, stop and ask some questions before you part with any money. It’s really important to check first if people have a waste carrier's license. Ask to see it before paying anyone to take your waste away. It’s always better to use the council’s household waste recycling centres if you can to get rid of your household waste.

The council takes all reports of fly-tipping seriously and will act quickly to remove waste which is reported to us.  Our teams will also try to find out who is responsible and prosecute where necessary.