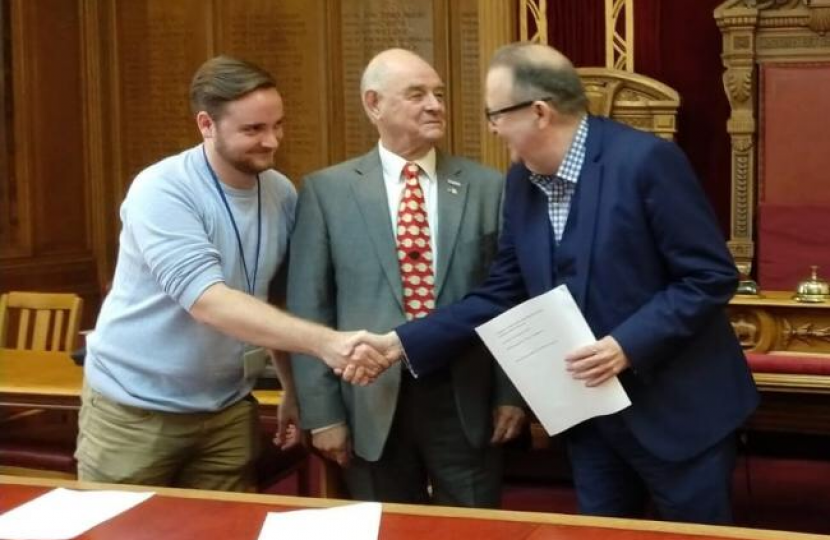 In the elections held on Thursday 2nd May 2019, the people of Bolton sent a clear message that they wanted change in the borough of Bolton, with all opposition parties either retaining or picking up seats and the Labour Party losing seven seats.

As a result of this vote, opposition parties have committed to working together to offer Bolton a chance for change. These are the priorities that they would like to see delivered over the next few years and are charging the Conservative group to deliver these cross party priorities;

1. A prospective investment of £10 million into the borough’s crumbling roads and highways to address one of the towns most pressing needs and a top priority of Bolton’s residents. We recognise that this will only go a small way to fixing a large borough wide problem. We will therefore explore ways of leveraging in, significantly more money to improve the roads and pavements of Bolton. The executive member for regeneration will lead on this but will include members of other parties in discussions relating to this priority. A scheme will be devised to consider how this investment can be considered in an equitable and a fair manner across the 20 Wards. This will be undertaken in consultation with the relevant officers and members to agree a lawful and proportionate approach. This work will have a set timescale and will be a task and finish project. Executive member for regeneration to lead.

2. Children’s and Adults services take up a large percentage of the council’s time and resources. There is a renewed commitment to prioritise these vital frontline services which support themost vulnerable in our town. There will be a relentless focus on both the quality of delivery and effective commissioning of these services. Executive members to lead.

3. We reassert our commitment to protecting the Green Belt and maintaining the integrity of the existing Green Belt from any further incursions per the spatial plan unanimously signed off by council.

4. Some secondary schools are falling behind in terms of achievement and far too many students seek further education outside of the borough. The executive member for children’s services will lead a review into this worrying trend and report back to council on any action the council may need to take.

5. More and more of the borough’s children are falling into care, the executive member for children’s services will lead a review into this and report back to council with their finding and recommendations.

6. A Conservative led council restates its opposition to fracking in the borough on land owned by the council.

7. The Council will seek fair funding for all areas of the borough in areas such as public realm-works where need is universal but will continue to use deprivation indices where appropriate in tackling poverty.

9. Continue the commitment to plan for health services to be available at the proposed new Farnworth hub and the Horwich Leisure Centre site.

10. The Council will help to coordinate promote and assist in community litter picking groups that play such a vital role in the fight against litter. The council will take a zero tolerance approach to fly tipping dog fouling and littering and will explore best practice in other authorities, in attempting to reduce this blight on our town. To be led by the executive member environment and within the financial resources and capabilities of the council.

11. To introduce a fully transparent decision making process in neighbourhood management area working and moving forward there will be full disclosure of monies allocated and spent including the possibility for on line access to grants. To be led by the leader of the council.

12. A commitment to explore the possibility of agile working where welfare rights officers, universal credit advisors and other officers are available at designated hubs across the borough. To be led by the relevant executive member.

13. In the regeneration of our towns such as Horwich, Little Lever, Westhoughton and Farnworth, the council will via the lead member ensure proper consultation, and engagement processes. This will facilitate full participation of Ward Members and will be in accordance with Town Centre master planning arrangements. This clearly where relevant involves Town Councils. Relevant councillors from HBFI for Horwich, Liberal Democrats for Westhoughton and UKIP for Little Lever will contribute in regards to these processes. Regeneration plans for these areas will include a public consultation board and feedback recommendations to the regeneration portfolio. To be led by the executive member for regeneration. This is in accordance with permissible policies of the council.

14. Capital projects that were the priority of the previous Labour administration and have not yet commenced will be reviewed and where appropriate and with the agreement by ward members or the Town Council where applicable and in consultation with the executive member of regeneration, alternative allocations will be explored.

15. The Council will find it both necessary and desirable to make grants to outside bodies. This system has in recent years fallen into disrepute, it is proposed to establish a PDG chaired by the Liberal Democrats and a vice chair from F&KF to look into ways this system can be more open and transparent. This is in accordance with work already undertaken in the council.

16. A review will take place of the Town Council’s roles and responsibilities. The LGA are due to review governance in the Summer 2019. This builds on a recommendation of the Corporate Peer Review in June 2018.

17. Special Responsibility Allowances (SRAs) have been maintained even though the council has lost functions and shrunk in size. This not only looks bad but also fails to reflect the reduction in the amount of work the council does. We will resolve to ask the independent remuneration panel to conduct a review into the number and sizes of SRAs with a commitment to cut the costs of SRAs. To be led by the leader of the council.

18. We believe it is the duty of opposition parties to scrutinise meetings, scrutiny chairs will be offered to all parties not included in the executive. We therefore recommend 3 Labour chairs, 1 other chair from a non executiveparty. Leader of the main opposition to chair the audit committee. This will also form part of the review identified in para. 16

19. The role of outside bodies plays an important part in the life of the council.  Whilst it is acknowledged the political balance rules have been used to appoint members to these bodies, the council agrees to review its previous conventions. Leader of the council to lead.

20. A PDG led review of the winter gritting schedule and a recommendation from that group to be put before the appropriate Executive member for consideration. To be chaired by H&BFI and vice chaired by the Liberal Democrats.

21. The housing allocation plan to be brought to the appropriate scrutiny committee.

22. A commitment to have pre budget talks with supportive parties, on how to best allocate the councils scarce resources and prioritise resources to the areas of greatest need. A commitment to once again go out into the community, to area forums and town councils to explain the budget process and the choices that need to be made. Deputy leader of the council to lead.

23. A commitment to review council HR policiesline with other comparable councils to ensure they are fit for purpose. Senior officers to produce a paper for discussion.

24. As indicated at para. 16 a review of the council’s constitution will be independently led by the LGA as recommended by the corporate peer review in June 2018.  The recommendations will be shared and endorsed by a cross-party group with eventual approval at full council.

25. To improve the culture of the town hall. Bolton council in particular and Bolton Councillors in general are held in low esteem in the town; we still have high levels of staff absenteeism, sickness and morale whilst improvements have been made this still has a long way to go. We are committed to improving this culture and will back senior officers in their efforts to do so. We will not put the council finances in peril and we will be inclusive of all parties whilst at this same time ensuring vital and sometimes difficult decisions are taken in the best interests of the entire town. Leader of the council to lead.

We believe this is a comprehensive programme for a Conservative lead administration to try and implement on behalf of The Conservatives, Liberal Democrats, F&KF, UKIP and H&BFI.

It does not reflect the priorities of one single party but a number of parties who believe that the borough wants change, voted for change and expects that change to be delivered.

We Group Leaders of the Parties listed below are wholeheartedly committed to this Statement of Intent and priorities and give a commitment to support the appointment of the Conservative Council Leader and Conservative Cabinet.