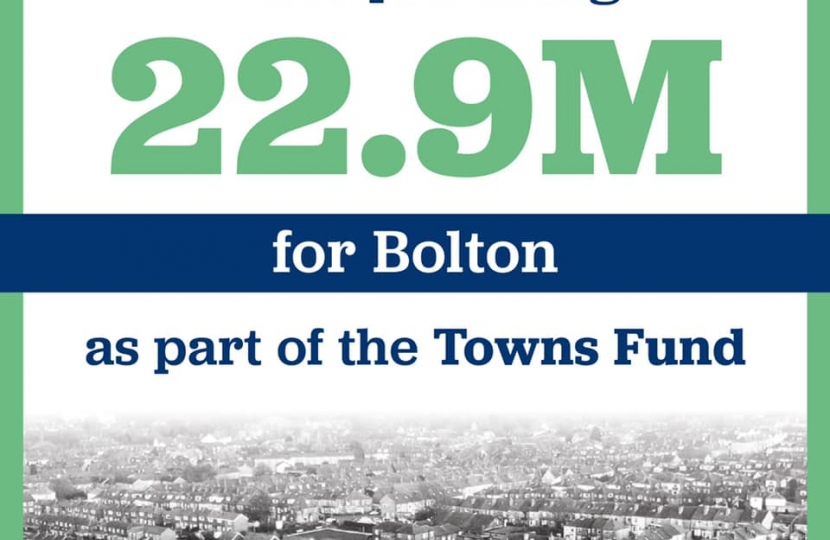 Today, it has been announced as part of Budget 2021 by the Chancellor that Bolton has been successful in its bid to the Towns Fund and will now be receiving £22.9m as a result.

Last September, Bolton was named as one of a 101 places in the UK to share in the £3.6 billion Towns Fund, which aims to ‘support towns to build prosperous futures’. 42 places across the Northern Powerhouse are among the pioneers of new ‘Town Deals’, which aim to boost towns through improving transport, broadband connectivity and providing social and cultural infrastructure.

Bolton is one of two towns in Greater Manchester that are set to receive the funding announced today. This shows the Conservatives commitment, both locally and nationally, to levelling-up our areas in the North.

The council had already secured an additional £1m from the fund, which will be invested in improvements to the public realm on Ashburner Street and the surrounding area.

This announcement today is a testament to the faith that Conservatives locally and nationally have in Bolton. We have been working hard to secure funding, on top of previous awards, to make sure we regenerate Bolton and bring it into the 21st-century.

For too long, other parties spoke of regeneration but we're making it happen. Our commitment to the people and towns of Bolton is 100%. We've already created local deals with the towns of Little Lever, Farnworth, Kearsley, Horwich, Blackrod and Westhoughton. Now, thanks to the Towns Fund and the Chancellor, Rishi Sunak, we can go even further.

Bolton is on high thanks to this £23 million vote of confidence to reinvigorate our Town Centre. Bolton Council’s ambitious plans are ready to go.

Along with Chris Green MP we are serious about Levelling-Up, and Rishi has matched the ambition with the necessary funding. The Chancellor’s plans strike the perfect balance between economic support and economic recovery, protecting jobs and livelihoods.

Going through these difficult times, I am glad to see that the Chancellor continues to focus on rebalancing the local economy by giving a £22.9 million boost to the Town’s Fund for Bolton.

Cllr David Greenhalgh and our team leading Bolton Council have a huge ambition for revitalising our great town centre. Working with Mark Logan MP, we have been campaigning for the Government to invest locally so I am delighted that the Chancellor has listened and is going to deliver.

Following the 2021 Local Election, the Conservatives have become the largest party on Bolton Council.