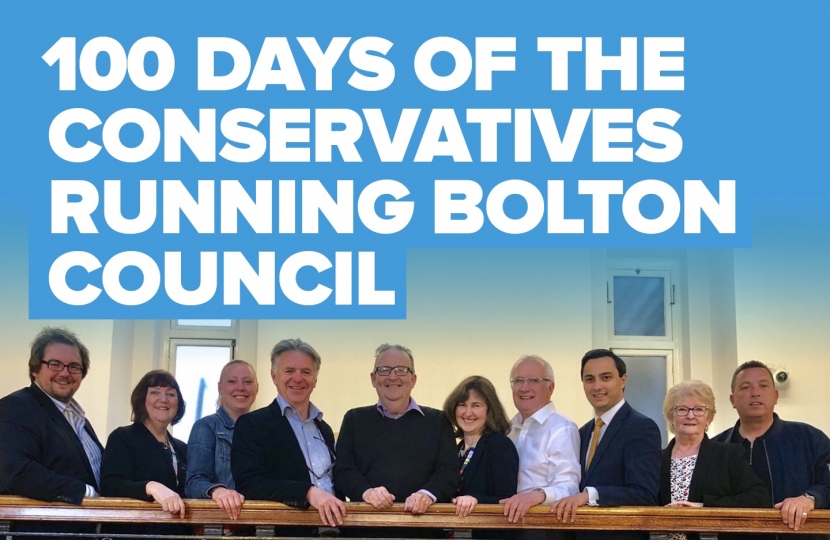 We’re proud to say that we have just reached 100 days of a Conservative Bolton Council! For too long, things under the previous administration were left to sit idle. We thought it was time to change that, so here’s what we’ve already done:

1. An EXTRA £10m on resurfacing road and pavements, spread evenly across the borough

2. Introduced STRONGER enforcement against aggressive begging in the town centre so we all feel safer shopping

3. We have frozen and REVERSED Labour’s proposed increase of councillors’s allowances and special responsibility allowances

4. Instilled the principle of FAIR funding across all areas of the borough, ending the favouritism under the previous administration

5. Both of Bolton’s £25m bids from the Government’s Future High Streets Fund successfully DELIVERED and through to the next round

6. An extra £1.5m to IMPROVE our parks and play areas, clean up the borough, increase grass cutting, and plant more trees and wild flowers

7. The setting up of action groups, made up and chaired by local residents and ward councillors to deliver on the £16m INVESTMENT in the towns of Farnworth, Westhoughton, Horwich, and Little Lever

8. Money ACTIONED to support the reinvigoration and establishment of new Neighbourhood Watch schemes

9. We’ve put a STOP to spending taxpayers money on the most expensive barristers to defend house building on Hulton Park and a commitment to the protection of the Green Belt

10. Governing OPENLY and TRANSPARENTLY, with decisions made in public and not behind closed doors, and with Chairs of Scrutiny Committees given to the opposition parties

When we stood for election, we promised a departure from the old way of doing things. Bolton is on the up and we’re going to make it succeed.

Prime Minister’s statement on protecting the Union: Speech in Full

The Prime Minister sets out the case for the Internal Market Bill, which would secure free trade inside of the United Kingdom once we exit the transition period next year.